Things have been crazy busy in my world lately, and I’ve missed lots of events. The one I was saddest to miss was the first-ever SEX+STL book club at the end of  October.

Of course being out of town didn’t stop me from reading the October selection, and I found myself in for a fun read. 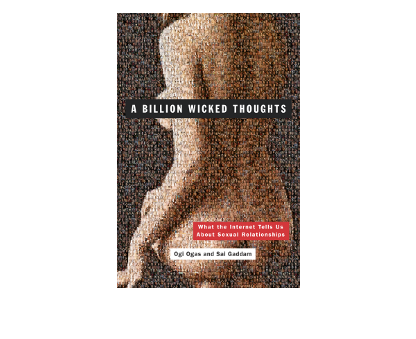 WHAT REALLY TURNS PEOPLE ON? Men and women haven’t been honest—with themselves or each other. What they say they like is often quite different from what they look for when nobody is watching. But how can we learn the truth?

Two bold young neuroscientists have initiated a revolution in the scientific study of sexual attraction. Before Ogi Ogas and Sai Gaddam, the only researcher to systematically investigate sexual desires was Alfred Kinsey, who surveyed 18,000 middle-class Caucasians in the 1950s. But Ogas and Gaddam have studied the secret sexual behavior of more than a hundred million men and women around the world. Their method?  They observed what people do within the anonymity of the Internet.

Authors Ogi Ogas and Sai Gaddam  mined the search engine  Dogpile’s search  records  in order to determine what insights  could be gained.  On the whole the results provided little new ‘information’. The way that Ogas and Gaddam interpret it, the findings just echo the conventional ideas we have about men spreading their seed indiscriminately and women being choosy maters. It was annoying to see the authors deal with their material so uncritically, but it was to be expected as they took the search results and plugged them into some of the more simplistic models of evolutionary psychology.

What WAS fun about the book, however, were the ‘info-snippets’. They had me intrigued and laughing in turn.

I wouldn’t spend the hardcover price for this book again – even with the awesome 20% discount that you get at Left Bank books when you buy the SEX+STL book club selection.

But I would spend a couple evenings reading through it.

My recommendation? Head down to Sidney St. because my copy is going to the Shameless Grounds library tomorrow. Grab a coffee, flip through, have a good time.

Even if you don’t like it, you’ll definitely want to sign up for the SG library card – the library collection is growing and at this point, it contains holdings you can’t really get anywhere other than through a credit card transaction on the internet. It’s so worth it.

Join us Thursday, December 8th at Foam (Jefferson and Cherokee) for the next SEX+STL book club.  Keep an eye on the calendar and Facebook for details.

Oh yeah – be our sexy, nerdy online friends – friend us on goodreads!