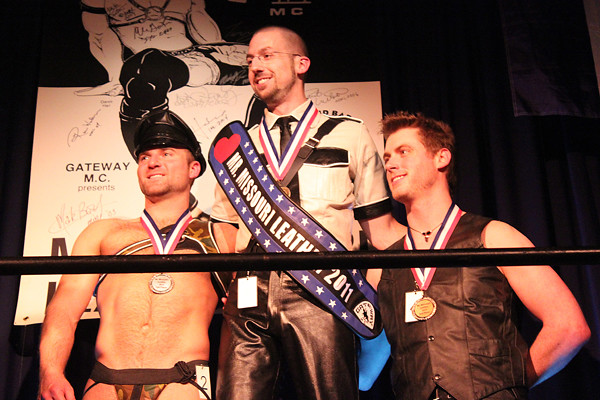 I ran into DJ Kaiser a few months ago at South City Diner, shortly after he’d started Bad Boys of St. Louis. Having only met him in passing, I thought we’d make small talk for a few minutes. We ended up talking for well over an hour about the sex positive atmosphere in St. Louis, particularly the division between the pansexual and gay communities and the inclusion (or lack, thereof) of transgender individuals. It was then that I learned of DJ’s intention to run for Mr. Missouri Leather. About a month later, I was in the audience at JJ’s Clubhouse and Bar when DJ was awarded the title.

I caught up with DJ after his very impressive 9th place finish at the International Mr. Leather competition in Chicago.

David Wraith: What inspired you to run for Mr. Missouri Leather ?

DJ Kaiser: Friends had been after me for a few years to run for Mr. Missouri Leather.  I didn’t own any leather and I felt like I would be a poser trying to “dress up” like a leatherman.  Then one Halloween I bought some leather on eBay.  People teased me for grabbing something out of my closet and not really dressing up for the occasion.  It was then I realized that everyone else already saw me as a leatherman.  That started to transform me.

The other issue holding me back was community involvement—I wasn’t involved in any groups.  People suggested that I just join some groups, but I didn’t want to join groups just to fluff up my application.  I wanted my involvement to be real. Then I started the Bad Boys of St. Louis and quickly found that I had become a leader in the community.  That prompted me to get out to other groups so that I knew what else was out there and work on making all of the connections that I could.

Once I had gained confidence in myself to be able to wear leather and found myself very involved in the community, I knew that I had to run for MML.

What are your goals for your title year?

I’m still looking into some practical ways to help forward the cause of Trans inclusion.  My hope is to convince a few groups to articulate a pro-active policy of Trans inclusion.  I’d also really like to do some fundraising for TransHaven.  This is a group that really has their heart in the right place and understands the importance of serving the community.

Already I’m talking to guys about running for Mr. Missouri Leather next year.  I want to see my title grow over the years with strong competitors who do great things in our community and compete well at IML.  I don’t just want to think about my goals for my title year, but long-term goals in our community.

What was your experience at International Mr. Leather  like?

IML was incredible.  I laughed, I cried, I was calm, I was nervous.  It’s every emotion you can possibly have compacted into one weekend.  My ankles, knees, and back were killing me all weekend.  There’s a lot of standing around and waiting.  You get called for an event hours in advance.  On Sunday, our call time was noon and we weren’t released till 11 PM.  Thank god they fed us that day (they didn’t any other day!)

The experience was really about the 52 other guys.  I knew many of the guys from online from our Facebook group and about a dozen of them from Cleveland Leather Annual Weekend in April.  During IML weekend, everyone picked a number, mine was 27, and that determined a lot.  I was the first person in Group C for interviews.  The thirteen of us were together for a few hours as we went in one by one for our interviews with the judges.  Guys came out of their interviews crying and we were there for each other, holding each other, supporting each other.  When you cry with other people, it really brings you together.  Those are the moments that I’ll most cherish.

I know that I’ve made a few life-long friends from this experience.  Contestant #28 was Gerrie, Mr. South Africa Leather.  He stood right behind me or right next to me throughout most of the competition.  If he saw I was cold in the hallway, he’d wrap his arms around me to keep me warm.  I know we’ll stay in touch and hopefully I can go visit him in South Africa.  Then there was Ben, Mr. SECC Leather.  Sunday morning he said he wanted to walk with me to the holding room because he felt close to me.  That really touched me to hear that from someone.  Ben was the third person announced into the Top 20.  When my name was announced, I got to stand right next to Ben and he was the first one to welcome me as a finalist.  That’s a moment I’ll never forget, and luckily it was captured on film.  There were so many special moments like that.

Making the Top 20 was surreal.  I was confident that I’d done enough, but there were a lot of great guys in this competition!  You have to accept that there are 9 judges and that it is all very subjective.  It’s all about what those nine judges are looking for.  I didn’t even hear my name being called, just my title: Mr. Missouri Leather.  Leaving the stage with the other 19 finalists brought a lot of mixed emotions.  I was so excited to be in the Top 20, but then I looked back at the other 33 guys.  Some of them had become very close friends of mine and many of them were just as deserving to be a finalist.

The final competition at the Harris Theater on Sunday night was the true highlight.  The handlers moved the luggage of the Top 20 contestants to another dressing room right off stage.  The 20 of us really bonded as we had to rush to change between our formal leather and our jock straps.  Walking on stage in my jock strap with professional pictures from my photo shoot (taken two days prior) being shown on the screen behind me was just exhilarating.  The whole competition felt so professional.  When I gave my speech, I was so nervous.  I actually lost myself in the speech and had a longer pause than planned.  But in the end, I placed 9th.  Top 10 was my goal.  Expecting to win or place Top 3 is unrealistic.  There are too many factors that you can’t control.  Too many variables.  All you can do is compete against yourself and be the best that you can be.  And that’s what I did.  I wouldn’t change a single thing I did.

DJ Kaiser will be appearing at the Black and Lou Pride Ball, Friday, June 10th and will be the guest speaker at the SEX+STL Coffee Talk at Shameless Grounds, Sunday,  June 12th at 3pm.